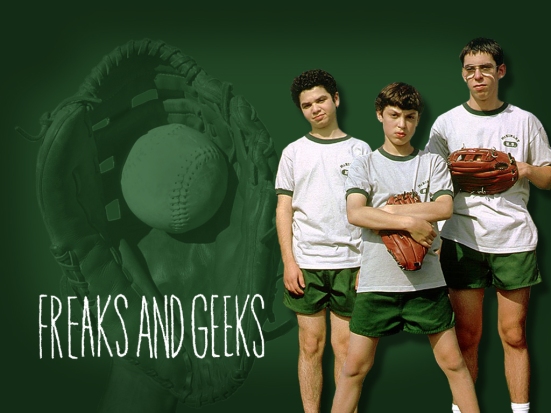 If you remember the pain and humiliation of dodgeball, then freaks and geeks is for you

Yet another short-lived TV show that was perhaps ahead of its time. Freaks and geeks is a bit harder hitting than ‘That 70’s Show’ and that may explain why it was cancelled in its infancy but the legacy of F&Gs lives on via the careers of alum Seth Rogen, James Franco and Jason Segal – this is where they got their start and all of the talent that Segal and Rogen bring to the screen today was evident in this excellent little show. Focusing on the well-worn theme of teen angst with an ensemble cast of misfits, F&Gs showcases the ever-widening generation gap that teens experienced in the 80’s. It was a time before it was considered cruel and unusual punishment to make all students have communal showers and where student counsellors were most likely pot smoking hippies who still thought they were cool. Cobain’s existential cry to ‘entertain us’ hadn’t arrived yet and video games were in their infancy so fun had to be made or found, usually in the form of sex, drugs and rock n roll.

The show focuses on Lindsay Weir who decides to leave her straight A, Mathlete existence in order to hang out with the school ‘freaks’. Lindsay’s quest for identity and meaning propels her and gives the series an intelligent and insightful lens through which to view the ongoing (often hilarious) escapades of her friends and her little brother who has difficulty understanding Lindsay’s transition. While not a drama, and loathe to take itself seriously, F&G’s recreates the massive socio-cultural changes happening during the 80’s through the eyes of American Teens.

3 thoughts on “Were you at high school in the 80’s?: Freaks and Geeks”